One way to teach social responsibility in your educational technology classroom.

Cell phone use in classrooms is one of the teachers’ modern-day concerns.  What is surprising to know is that this phenomenon isn’t just limited to classrooms it has reached a peak in the corporate world as well  (Binford, 2017). People in general have a hard time putting down those cell phones.

These powerful devices can be a powerful tool for both industry and education.  At the same time, they can distract and slow productivity to a crawl.  So what is the solution?

It would be ridiculous to believe that your students would leave their time in education and enter the business world and change their habits.  So, the social protocols that you train them on now will translate into how they decide to utilize personal devices in the future when they enter the workforce. In your classroom establish lessons specifically addressing this complex issue.  Not rules per se, but rather educational moments that are built to instruct on the proper use of cell phones.

As an example when you have information to relay to students, use an old trick called “let me see your eyes”.  Ask the students to see their eyes and don’t begin teaching until you can see each one looking at you.  Then once you have their attention, instruct them to turn their cell phones face down.  Once they have complied, simply explain why you asked them to do that.  “Students, when you enter the workforce, you will have your cell phones just like you do today.  It is important that you are aware that there are times when you need to put them face down to understand what is being said.  This is one of those times.” Deliver a brief set of instructions or lectures and then let them know that now is the time that you can turn your phones back over, respond to any of your messages that you missed and complete the activity that you are working on.

While this isn’t an activity about compliance it is an activity about awareness of their situation.  It also addresses the fact that while their phones are face down, they are probably being texted and missing out on some big thing that their phones are prompting them about.  Giving them a preset time to address those issues will help them learn to plan accordingly.  Knowing that they will have an opportunity to address their cell phone during class will allow them to have better control over using them at inappropriate times.

Another lesson is to have peaceful moments in your classroom.  Explain to the students that you would like them to get a 30-minute break from their devices, and at this time you would like them to turn them off.  They will get to use them again shortly.  Explain why the break is important and how they are able to clear their minds of the thoughts of the day and focus on other issues such as workload that might be causing them stress.  Knowing that there is a time limit will help some students comply as they might actually enjoy taking a break even if they don’t know it for a year.

The key to all of this is consistency.  Do it repeatedly for the entire year.  Make managing cell phone use a part of your curriculum.

There are more severe cases of cell phone use in the classroom that can be troublesome, such as a student that refuses to not play a cell phone game or one that seems visibly connected to their device in an unhealthy way.  These are the outliers.  Avoid the temptation of lumping all your students into this category.  The outliers will need special help to modify their behavior.  Work on having separate conversations with them, that do not involve the entire class.  Most of your students will want to follow procedures that help them and lumping them into a category with your outliers will alienate them and rebellion might follow.  Have individual conversations with individual rule breakers while continuing to teach why self-control is something that we all need to practice. 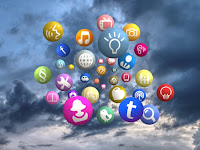 Collaboration and Communication Apps Review App #1 Discord Discord is a free voice and text communication application on most mobile and desktop operating systems. This tool utilizes text, voice, images, and video where users communicate in separate spaces called servers. Each server contains specific users as allowed by the server manager (most of the time, the person that created the server). Within each server, chat groups are set up with topic titles outlined with a hashtag in a format such as #generaldiscussion. Within that hashtag is a separate chat-style location where all the server members can access the content. Discord allows users to be updated when something is posted in a specific hashtag location, or they can silence locations and not hear from them. Voice channels are also created using a speaker icon and a descriptive name. To enter voice chat, you click on the location and are automatically in the voice discussion with any other person currently in that location